The first plenary lecture was given by Nobel Prize Winner, Hiroshi Amano, Director, Center for Integrated Research of Future Electronics, and a Professor, Institute of Materials and Systems for Sustainability, Nagoya University. The Clock Tower Hall was so jam-packed there were so many standing audiences.

The title of his plenary lecture was “Development of Sustainable Smart Society via Transformative Electronics”. At the beginning of the lecture, he demonstrated the mechanism of the generation of white light using the arrays of blue LEDs with a practiced hand. He is proud that the white LEDs in conjunction with solar cells and batteries enable nomadic children of Mongolia to study nights, He emphasized the contribution of the white LED to the reduction of power consumption, His lecture was composed of three parts: AlGaN-based deep ultraviolet LEDs (DUV LED), GaN-based heterojunction field-effect transistors (HFETs) and photocathodes (or electron emitters).
According to UNICEF report in 2015, 663 million people still lack access to safe drinking water and 2.4 billion people do not use safe sanitation facilities. The high-power DUV LEDs have been utilized in commercial water sterilization and purification systems.

He compared the energy losses in photovoltaic power generation to bank transfer fees just for fun. By replacing Si-based power devices with GaN-based power devices, the average efficiency of inverters or converters can be improved from 95% to more than 99%. He said that one of his dreams is to replace the transformers used in Shinkansen train cars by the semiconductor devices completely.
In comparison with the commercial GaAs photocathodes, GaN and InGaN photocathodes have much longer lifetimes and higher quantum yields. He demonstrated that the short high-power pulsed operation is very promising for observing the blurring of moving objects.

All the audiences had a sense of the possibilities for further development of the research on the GaN based devices in the future. 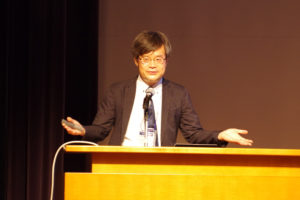 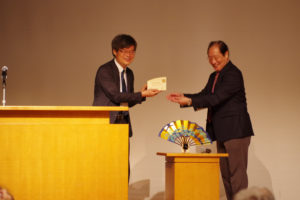