This presentation discussed (Bi,Sb)2Se3 as an affordable material for energy harvesting in the low to mid-range of temperatures. Rhombohedral Bi2Se3 is isostructural with the telluride whereas orthorhombic Sb2Se3 has a chain like structure. Investigation of the pseudo-binary Bi2Se3-Sb2Se3 phase diagram was reported and shown to consist of two single phase R and O regions, separated by a two-phase region. The RO structural change impacts on both electronic and dynamical properties and ZT=0.3 may be attained in O-(Bi,Sb)2Se3. Further improvements in charge carrier concentration through iodine doping raises this to 1.0 at 800 K.

This presentation focused on how to achieve single-crystal–like transport properties in polycrystalline phase through a new processing method, which seeks to exploit structural anisotropy to texture the material. Processing consists of hot-pressing powders contained within a metal sheath for relatively short periods at modest temperatures. (Bi,Sb)Te3 and SnSe were presented as examples. Although an observable degree of texturing was achieved in the latter, single-crystal levels of anisotropy in the properties have not yet been realised. The method was also shown to provide a one-step synthesis and consolidation process for the preparation of nickel-substituted tetrahedrite. 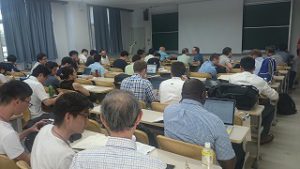 A packed conference room for Session A-5

The authors showed interesting way to enhance thermoelectric figure of merit of several materials such as BiSbTe, BiTeSe, and half-Heusler. They successfully reduced the thermal conductivity by introducing dislocation arrays at around the grain boundaries. They achieved 30-50% enhancement of their zT.