There were many interesting presentations about unique electronic structures as well as magnetic and electrical properties of oxide thin films and multilayers in this symposium. The oxide compounds for which the electronic structures and properties were reported are SrTiO3, BiFeO3, Bi(Fe,Co)O3, (La,Sr)MnO3, LaNiO3, LaMnO3, YBa2Cu3O7, Y3Fe5O12, Gd3Ga5O12, Y(Mn,Cr)O3, LaCa2Fe3O8, SrRuO3. Two keynote lectures given by C. G. Van De Walle and H.-U. Habermeier clearly indicate that there exist some critical factors, which have great influence on the electrical conductivity and magnetization, such as carrier density, number of oxygen vacancy, distortion of crystal structure, strain induced in thin films. For the case of SrTiO3 thin films which have point defects, as suggested by two invited presentations (A. Schulman and F. Gunkel), the temperature dependence of resistivity manifests the Kondo-effect-like behavior depending on the oxygen partial pressure and carrier density. The charge transfer in multilayers such as SrTiO3/GdTiO3 (C. G. Van De Walle, as mentioned above) and LaNiO3/LaMnO3 (M. Kitamura) also plays an important role to determine transport properties as well as magnetic structure. Other topics include interest magnetic domain patterns in composites between ferromagnetic metals and oxide superconductor (A. Palau), spin Hall effect and electrically driven magnetization dynamics in Y3Fe5O12 (A. Hoffmann), and spin Seebeck effect in paramagnetic and antiferromagnetic thin films (A. Bhattacharya). There were many active discussions about those topics concerning magnetic oxide thin films and hetero-structures. 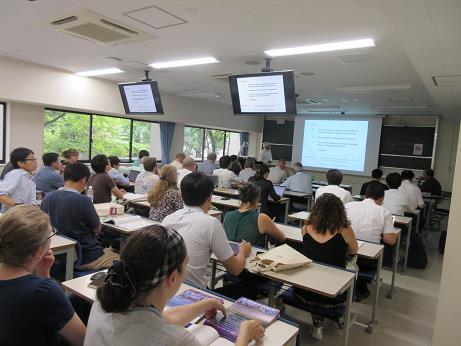 A scene of symposium A-4