Design of surface function of nano carbon materials is one of hot issues in the materials science. Professor Ado Jorio is right hand person of Professor Dresselhaus (MIT) who is authority of nano-carbon science. He worked with her for development of new characterization technique of nano-carbon such as graphene and carbon nano-tube from 2000. From his many innovative characterization works using Raman spectroscopy and AFM observation, he showed amazing clear D band and G band energy density image using his unique nano-antenna device. It was really surprising image data and his data attracts much attention from floor. Many participants in this plenary talk were attracted by his exciting talk.

Materials Science Department,Faculty of Science and Technology of New University of Lisbon

Professor Elvira Fortunato is one of the pioneers in the field of paper electronics; her original work on paper electronics opened up new opportunities of the expansion of the areas to which we could apply otherwise difficult electronic devices. In developing such electronic devices, a key element is the establishment of low-temperature and solution-based technologies that enables to construct high-performance electronics such as thin film transistors.

Professor Fortunato at the podium began her speech with some of the photos showing large-sized transparent OLED displays etc that clearly reflected growing thin film electronics market, and then continued to explain the importance of thin film electronics and how the devices have been developed. The main topics of the plenary lecture are some advances on solution-based metal oxide semiconductors (ex. ZnO- and In2O3-based oxides) and their application to electronic devices. Professor Fortunato explained the importance and usefulness of solution based-technology. Unlike conventional electronic device fabrication technologies that mostly rely on complex high vacuum equipment, the solution process has many advantages in terms of large-area deposition, roll-to-roll capability, easy control of composition, atmospheric processing, low cost, and so forth. The recent achievements by Professor Fortunato and her colleagues were then reviewed: they were successful in depositing solution-based InOx-based FETs at temperatures about 150 oC, and achieved a record high device mobility higher than 1 cm2/Vs. More importantly, the device performances were quite stable and reproducible. She also paid attention her focus on not only low-cost solution based-technology, but also on constituent materials to choose to fabricate the devices, that is, eco-friendly materials.

The symposium lasted for three days.  On the first day, we had session on thin film and nano sheets fabricated by various methods.  After the poster session (about 32 posters) for 2 hours, there was hydrothermal synthesis session.  On the second day, we first concentrated on low-thermal-conductive and thermoelectric materials, materials design, YBCO and Perovskite related materials.  Last session was on battery material.  On the third day, photoelectrochemical and magnetic properties of various materials were discussed.  One of the talks that attracted audience attention was on spinodal decomposition induced by magnetic field.  We find that there are areas related to advanced ceramics and composites where we should work hard to maintain sustainable society. 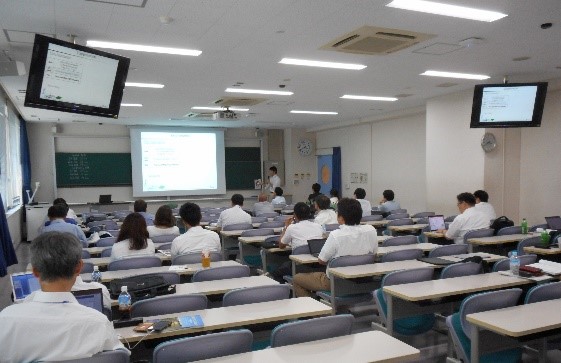 Prof Neophytou described his method to determine if nanostructures can improve Seebeck Coefficient. In the simple model of electron filtering there is actually no improvement. depending on lambda_E there can be a modest improvement. need quantum reflections not tunneling. Avoid ionized impurity scattering. dislocation networks can increase power factor. 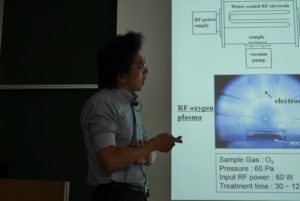 In the opening talk prof. Sdyder of Northwestern University reviewed the role of Fermi Surface Complexity Factor for Thermoelectric Materials giving a wide number of examples and state of the art of experiments an band structure calculations.

In his invited talk entitled “Novel nitride an oxide thin-film materials for thermoelectrics” Per Eklund (Linkoping University) reported about a ten-year investigation of ScN systems. While the nitride itself has a very good power factor, its thermal conductivity was too large to make its ZT acceptable. Adding Cr resulted in a significant reduction of κ. Further improvement of ZT could be achieved through a systematic investigation of transition metals capable of forming stable solid solutions with ScN (either ordered or disordered). A likely reduction of the thermal conductivity could also be achieved by generating (Ti, W)N-(Sc, Al)N superlattices, but the nanostructure was found to be stable only up to 950 °C, limiting its applicability. In the second part of his talk, Eklund discussed his research on Ca2Co4O9. Its laminar structure makes the material quite performing, and it was shown that thin films grown onto mica may be peeled off, leading to one of the few examples of flexible and self-sustaining inorganic thin films.

Gao Min (Cardiff University) ended the session with a keynote entitled “A high-throughput approach towards accelerated discovery of promising thermoelectric materials” where combinatorial methods were applied to quicken the exploratory research on new thermoelectrics. He focused on binary (and ternary) alloys. The aim of the wok was to reduce the enormous number of possible AxBy compounds to be tested in the search for high ZT. Using very simple element characteristics such as electronegativity and atomic weight, radius, and number, he could show how efficient TE materials cluster together. Although the method does not aim at pointing out which binary compound might have large ZT, it enabled the experimental investigator to discard binary (and ternary) compounds which do not qualify as good thermoelectrics. His analysis was supported by experiments carried out by laser melting that enabled the fast synthesis and characterization of a large number of binary compounds.

Prof. Mele of Muroran IT gave final remarks on the symposium A5 which was highly succesfull, with the highest number of presentations in the whole conference. All talks and posters were excellent and top-level research on thermoelectric was widely represented. Symposium A5 was enriched with AAT school (pre-event) and satellite workshop. There is strong intention to organize the thermoelectric symposium during IUMRS-ICAM 2019 in Nice.

Title: Enclathration of simple and complex cations in phosphide thermoelectrics

Kirill Kovnir from University of California (Now he moved to the Iowa State University) presented the design and realization of new caged compounds of Phosphide Thermoelectrics. The chemical way to design these new phosphide materials, the synthesis as well as their thermoelectric properties and the approach aimed for enhanced electrical properties were introduced in detail. Kirill Kovnir and his collaborators started their research in caged compounds of Ba8M16P30 (M=Cu and Au), which possessed a low lattice thermal conductivity of about 0.5 Wm-1K-1 or lower, a value very good for high thermoelectric performance. Further on, they continued to explore other caged compounds, such as BaNi2P4, SrNi2P4, Ba-Zn-Cu-P and Ba-Ge-Cu-P based system. The chemical bonds and coordination of elements are discussed in detail for more insight on the variation in thermoelectric properties. A high thermoelectric figure of merit of about 0.8 was achieved in the best compounds due to the improved electrical properties from chemical doping.

Kunihiro Kihou from AIST, Japan and collaborators attempted to synthesize Zintle phase compound of K doped BaZn2As2 and investigated the thermoelectric properties. BaZn2As2 is the analogue of famous Zintl compound of CaAl2Sb2. This K doped BaZn2As2 compounds were prepared by the AIST tube method, which is suitable for handling materials with high reactivity. With the K doping, the resistivity and the Seebeck decreased, while the lattice thermal conductivity remained the similar value. Finally, the thermoelectric figure of merit ZT was increased from 0.2 to 0.7. This enhancement is mainly resulted from the much enhanced electrical properties.